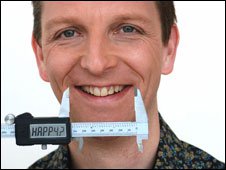 Britain's Happiness is to be Measured in a Survey 英國人將調查他們的快樂指數

What makes you happy?

the nation in a survey this year, as part of a drive

As the global recession continues, Mr Cameron says he is seeking

a better measure of progress than GDP alone.

He claims economic studies often focus too much

on standard of life rather than quality of life.

The problem is that assessing happiness is a slippery subject.

a person's income than a subjective, less tangible factor like wellbeing.

Critics say the £2m (20m yuan) scheme will not produce any meaningful results.

just as the government launches the biggest public spending cuts in decades.

"woolly" and "impractical", but it is not without precedent.

Canada has an Index of Wellbeing which looks at how things

like money and education affect health and the sense of community.

since the early 1970s as a tool to help policy-making.

So what kind of answers is he likely to get?

While the full survey begins later this year,

respondents to an initial consultation have already listed their top priorities.

Job security, good health and relationships with family members are

what matter most to people in the UK, according to the findings.

In fact, having a job was listed as more important than being paid a high salary.

So perhaps there is truth in the old adage that 'money can't buy happiness'.

An idea David Cameron may find solace in as he tries to find a way out of the recession.